Is it psychosomatic then?


Today is Fibromyalgia and M.E/CFS awareness day, the day when the people who live with and charities who support try to raise awareness and inform people about these conditions. 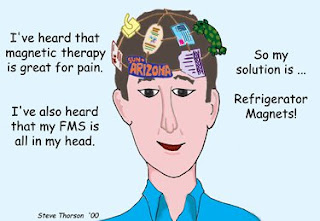 Today’s post is dedicated to every person who has had a close family member suggest in some way that quite frankly my dear its all in your head. That somehow this debilitating, fluctuating and sometimes progressive illness is just a figment of your imagination and you are an attention seeking lay about who enjoys lying in bed watching Jeremy Kyle whilst eating Ben and Jerry’s ice cream.

We as in the collective society of individuals use language in a way that almost
predisposes us to see things as a battle and if we show any sign of weakness or giving in we somehow have failed. Add a complex condition thrown in with no obvious blood test or physical sign to point to its gets more difficult. People seem to want to “see” something to believe it’s true.

It strikes me we (I'm as guilty of this too) play things down, hide what’s going on, will struggle on to the point of crisis why?

Is in part that as a society we pride independence and value people who over come adversity, our news papers are full of plucky fighters, battling on winning against the odds to defeat their illness and climb the highest peaks, work through the pain carry on, never letting their illness defeat them.

Why on earth do we as people living with these illnesses buy into this crap, who on earth are we protecting?
We want to raise awareness, face book, blogs, twitter, our jumpers will be full of yellow ribbons with black spots on for FMS, Blue for M.E we will spend a day lifting the lid on, exposing the truth and not hiding it for 1 day the other 264 we will say

“Oh I'm just a bit tired” or “Im fine ya know” or even “a bit spoon less” as if that means anything really. We think people won’t want to hear, they will get bored, it’s chronic so we won’t get a bunch of flowers and the get well soon cards will be faded and forgotten because we won’t get better.

So what how could today change things for the people so ill, frightened and in some cases like the young woman in Denmark threatened with being committed to an asylum on the grounds of insanity for daring to have M.E

We can only change ourselves and start being truthful, I don’t mean we moan and whinge every five minutes but we stop playing the dam game. “I must carry on and do everything I did before in public while sobbing and seeking support in private one”

Today for me is about not only reaching out to others but to learning to draw a line and educate myself and other people – if you really want to raise awareness today then change one thing – make a decision to draw the line under dismissing your own illness and passing it off as “Just a bit tired” tell the truth. I know it’s hard, and you want to show the world your best face, because like I said recently you can cling to the idea of one day you will recover and pick up your life as it was.

If you know someone who says I thought I might run a marathon and raise money for charity ask them to run for M.E or Fibromyalgia to research it better and find a cure.

Seek some help if you are stuck in a cycle of boom and bust where you push yourself to do too much and then wonder why you make your symptoms worse.

But above all change your language, catch yourself when you say things about not giving in, only asking for help in a crisis, that somehow equating living with an illness that by its nature is unpredictable is just an obstacle in your path and if you battle it will somehow make it surmountable.

Perhaps if we all put a little less pressure on ourselves to be heroic, to cram so much into our life we never pause and don’t praise the other just as important qualities in people we will forever be stuck in the ridiculous circle of battling or Giving on what’s wrong with saying NO – this is my life is sometimes good, sometimes bad and I make the best of it.

We don’t because we fear being judged, left alone or abandoned and above all we try to live up to some imaginary standard that those closest to us feel it’s ok to make us feel bad about ourselves. The truth is people only have that power when we give it to them. Take your power back and learn to use it for yourself.

It isn’t easy changing yourself or learning to do things differently, and saying No, or accepting or even saying to other people hang on you don’t have that right to say that to me. But it is possible so do one thing today if you have

M.E or Fibromyalgia tell the truth and challenge you over one thing do it differently – stop yourself from perpetuating the myth it’s just a little bit of tiredness. Be honest not only with others but yourself. Superman and wonder woman are fictional characters for a  reason.

If you know someone with it – hey your reading my blog so you do  follow a link at the top of the page and read up, think about how you say things and do you think in terms of battling on or giving up?
Dont feel sorry for me, but please if you hear others around you talking like it then challendge them too. I dont mean strangers in the street, but friends, loved ones. think about your langiage and how you use it.

Why have I talked about language – simply language is powerful and if we continue to use it to diminish and belittle our illnesses into nothing very much how on earth can we expect anyone else to change their opinion and view point.

Happy to have thoughtful, funny or imformative comments..abusive crap will be deleted

I also blog at