Chuffed to bits I must say

The Radio Four Womans hour Power list is being compiled again, this year with a difference, instead of a list full of Mp's, the Queen and Journalists they want "Game changers" women from twitter campaigners to  women in thier communties that have bought about some kind of change.

I am very proud to have been part of the Spartacus campaign, most people would automatically think Kaliya Franklin and Sue marsh as being the architects of the successful "bedactivism" campaign that forced the government to make massive changes to their contentious Welfare reform Act 2012 as it went through parliament. Many got behind it, and I still remember the day the "Responsible Reform Report" was launched - the term I am Spartacus was coined and 1000's of tweets were tweeted.

The report was cited in speeches, so worried were the government they gave a lot of ground, it was proably the first time ordinary sick and disabled people using social media had done such a thing. Im not sure it will ever be repeated in such a way.

This is about game changers, they changed the game and yes they did, but the thing that enabled them to was the report - everything was built around that. and it wasnt written by Kali or Sue as they are the first to say its lead Author is someone else the real game changer in my humble opinion

Step forward blinking into the limelight

Doctor Sarah Campbell - like many in the campaign, is a chronically sick and disabled woman who before she had no choice but to stop working was a Mathematician & Researcher: The lead author and researcer of the Responsilbe Reform Report.

Sarah is amazing, From her day bed number crunched, researched, wrote and pulled together the resport, many others helped and contributed but without her intial research the incredile campaign would have been a load of angry people shouting, the game changed with phorensic annlysis, factual, careful and undisputalbe work.

The government benches freaked, and conceded and backtracked and worried and very nearly gave us more than we dared hope. Everything we said would happen in the report has happened, its a mess and the government chose not to listen made empty promises to buy off peers and MPs - the chickens are coming home to roost.

But back to Sarah - Game Changers are not always attention seekers, or leaders or even well known but I am proud to call her a friend and without her work I dread to think how very very bad it would be and its already very bad. 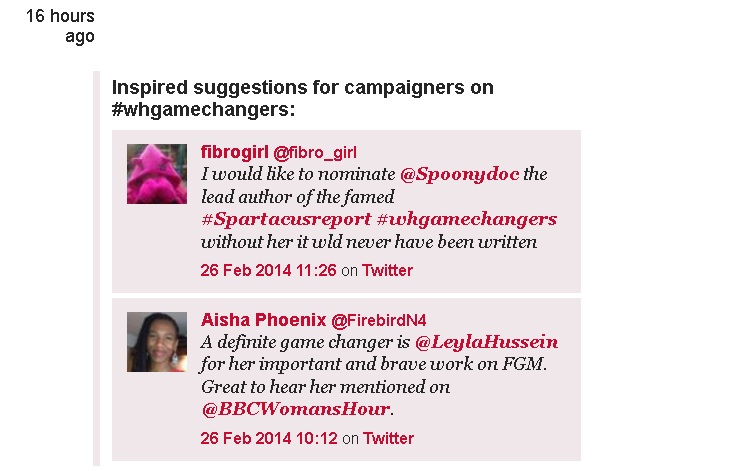 She will probably kill me for this, but i hope secretly will have a little geeky smile - Its was never about recognition for her I know, but credit where credits due
Posted by Fibrogirl at 09:01

Happy to have thoughtful, funny or imformative comments..abusive crap will be deleted

I also blog at